2020: ONE GIANT LEAP FOR SILICON VALLEY Dr. Michael (Mike) Romanowski is the FAA Aircraft Certification Service’s (AIR) Director of the Policy & Innovation Division (AIR-600).Prior to joining AIR, Mike was the FAA’s Director of Commercial Space Integration, where he provided executive leadership and direction for the evaluation and regulation of commercial spaceports, launches and reentries, and the integration of these operations within the National Airspace System. Mike also served as the FAA representative to the White House’s National Science and Technology Council and its Committee on Technology. He was the aviation advisor to the first-ever Chief Technology Officer of the United States during his time in the White House Office of Science and Technology Policy. Mike also served as the FAA Director of NextGen Integration and Implementation, with responsibility for ensuring the integrated application, planning, programming, budgeting, and execution of FAA’s NextGen air traffic management modernization portfolio. 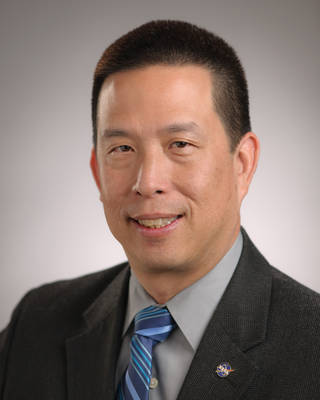 Dr. Eugene Tu is the Director of NASA’s Ames Research Center, where he leads a staff of civil servants and contractors in providing critical research and development support that makes NASA’s and the nation’s aeronautics and space missions possible. Most recently, he was the Director of Exploration Technology at Ames. He began his career as a research scientist conducting computational fluid dynamics research on the steady and unsteady aerodynamics of complex aircraft configurations. He also served as the Program Manager for the agency-level High Performance Computing and Communications (HPCC) Program and led both IT Base and HPCC programs. In 2001, the two programs were combined into the Computing, Information and Communication Technology (CICT) Program and he was selected as the CICT Program Manager. He has a BS in Mechanical Engineering from the University of California, Berkeley, and MS and PhD in Aeronautics and Astronautics from Stanford University.

Fireside Chat with DHS and NASA Parimal Kopardekar (PK) serves as the Acting Director of NASA Aeronautics Research Institute (NARI).  In that capacity, he is responsible for exploring new trends and needs related to aviation in the areas of autonomy, aeronautics manufacturing, and advanced air mobility.  He also serves as NASA’s senior technologist for Air Transportation Systems and principal investigator for the Unmanned Aircraft Systems Traffic Management (UTM) project. He was formerly manager of the NASA’s Safe Autonomous System Operations Project, which developed autonomy related concepts, technologies and architectures that will increase efficiency, safety, and capacity of airspace operations. Prior to that, he managed Next Generation Air Transportation Systems (NextGen) Concepts and Technology Development Project. He enjoys initiating new concepts and technology ideas that increase airspace capacity and throughput, reduce delays, and reduce the total cost of air transportation. At NASA, he has initiated many innovative research projects including reduced crew operations, net-enabled air traffic management, autonomy for airspace operations, Shadow-Mode Assessment using Realistic Technologies for the National Airspace System (SMART NAS), and low-altitude airspace management system focused on Unmanned Aircraft Systems (UAS) operations. In 2017, he was named among the 25 most influential people in commercial drone industry. Tim Bennett has over 30 years managing, designing, manufacturing and testing intelligence, surveillance & reconnaissance (ISR) and signal intelligence (SIGINT) systems for manned and unmanned airborne systems. He started his career at NRL working on communication programs like the Classic Wizard. His recent accomplishments include leading the design and manufacturing of the Universal Ground Control Systems used to control the Gray Eagle, Shadow, Hunter and Orion UAS. Also, as the Product Director, he lead the effort for the design, manufacturing and testing of Orion UAS that holds the MALE long endurance record of 80 hours for continuous flight, with the ability to fly several more days without refueling. Mr. Bennett joined the Department of Homeland Security Science and Technology Directorate in 2015 where he was the Deputy of the Program Executive Office (PEO) for Unmanned Aircraft Systems (UAS). He led manned and unmanned airborne research and technology transfer to the Immigration and Customs Enforcement (ICE), United States Coast Guard (USCG) and Customs and Border Protection (CBP) for the Borders, Immigration and Maritime Division (BID). He currently is responsible for the enabling of UAS and counter UAS technology for Department of Homeland Security Science and Technology Directorate.

Colin is an Associate Project Manager in the NASA Revolutionary Vertical Lift Technology project.  His research background is in the area of high-fidelity aeromechanics and flight dynamics simulation, and flight dynamics, flight controls and handling qualities of various rotorcraft configurations.  He recently led a project called DELIVER (Design Environment to Novel Vertical Lift Vehicles) that investigated the used of conceptual design and sizing tools applied to new eVTOL designs with application to urban air taxi and package delivery type vehicles. He has a BS in Aerospace Engineering from the Royal Melbourne Institute of Technology, and a PhD from the University of Maryland. Dr. Val PetrovFounder and CTO of PteroDynamics, Inc.
Dr. Val Petrov is the Founder and CTO of PteroDynamics Inc. He earned a Master’s Degree in Applied Mathematics from Moscow Institute of Physics and Technology, a Ph. D. in Physical Chemistry from West Virginia University, and did Post Doctoral research in Nonlinear Dynamics at University of Texas at Austin. He founded PteroDynamics in 2017, after he had successfully flown the first prototype of his newly invented distance VTOL airframe design he dubbed “Transwing.” This was the logical next step in Dr. Petrov’s journey of building experimental aircraft and related innovations, which began when he built his first fly-by-wire airplane from scratch at the age of eight. Dr. Petrov built numerous experimental aircraft, including VTOL and high altitude vehicles, and developed many related innovations in flight control and navigation systems and airborne communications systems. In his role as CTO for PteroDynamics, Dr. Petrov oversees the company’s research and development and commercialization of designs for its aircraft. Technical Fellow, Aurora Flight Sciences
Bob is currently a Technical Fellow at Aurora Flight Sciences, a subsidiary of Boeing. He mainly works on the design of non-traditional aircraft, including sub-scale and full scale prototyping. He has been working on VTOL aircraft professionally for 20 years, but has also worked on Mars aircraft, solar aircraft, submersible aircraft and even a few conventional aircraft.

Prior to his present job, he was a Senior Engineer at zee.aero (now called KittyHawk and Cora), working on manned electric VTOL aircraft. Prior to that he was Chief Aircraft Designer for Aurora Flight Sciences. He has also worked as a designer on the Lockheed F-117 Stealth Fighter and as a consultant. He was a principal designer on the MIT Chrysalis, Light Eagle and Daedalus human powered aircraft, as well as a principal designer of the “Chicken Whisperers” Red Bull Flugtag aircraft that has held the world distance record since 2013.

Bob has a Bachelors degree in Aeronautical Engineering from MIT and a Masters degree, also in Aero, from Stanford. He currently holds 22 US patents. He is a veteran of the US Coast Guard and an Associate Fellow in the AIAA. He was recently awarded the 2019 AIAA Aircraft Design Award for lifetime achievement in the field. Oliverís experience in the UAV and drone world is extended. He is a multi-discipline engineer in composites, mechanical, aerospace, electronics, aircraft design, controls, CAD, simulations, flight sim and flight test. He started work on his first design over 15 years ago, building the first of what would be many innovative designs ñ from ducted fans to box wings to tilt-wings.

Oliver has built and demonstrated over 12 VTOL drones in the last 12 years, plus a manned experimental aircraft, and has several patents in the field of manned and unmanned aircraft. Oliverís experience includes extensive wind tunnel tests at NASA Ames, UAV flight test at Moffett Field, California and Crows Landing in Central California.
Oliver has a MS in Computer Sciences from ENSEA-Paris and a BS in Electrical Engineering UPS-Toulouse (France). Oliver and Ed, co-founders of Sabrewing Aircraft, have been working together on a various projects since 2014.
Sabrewing is Oliver’s 3rd Aerospace startup. Mr. William Chan is the Project Manager for the ATM-X project. Previously, he conducted air traffic management research and held multiple Branch Chief positions at NASA Ames where he supervised air traffic management research groups. Prior to joining NASA, he was a flight test engineer for the C-17 program at Edwards Air Force Base and a lecturer in the Meteorology Department at San Jose State University. He earned Bachelor degrees in Aeronautical Engineering and Physics from Cal Poly in San Luis Obispo and an M.S. in Meteorology from San Jose State University with a research focus on aviation turbulence

Jennifer L. Richter is a partner with Akin Gump Strauss Hauer & Feld and represents a number of clients on UAS/drone strategy, development and operation.  Jennifer has represented technology and communications companies and investors for more than two decades.  She is ranked by Chambers USA as a leading lawyer in telecommunications, and she has been named a Super Lawyer for communications law multiple times. She brings years of in-depth experience in the communications field to her clients in the industry, possessing an insider’s knowledge of the business, gained while serving as vice president and general counsel of a wireless communications company she helped to build and sell to Sprint Corporation.

Jennifer was a voting member on the FAA’s Aviation Rulemaking Committee that studied and made recommendations to the FAA Administrator regarding technology to enable remote tracking and identification of UAS.  Jennifer is an active participant in NASA’s UTM working groups.  She also is a subject matter expert on the FCC’s Technological Advisory Council on UAS and the Department of Homeland Security’s CIPAC that is studying how to protect critical infrastructure from drones.  For the CTIA/NASA UAS Working Group, Jennifer is active with members, the FCC and the FAA on spectrum solutions for UAS.  The reliability, safety and security of UAS is highly dependent on the reliability, safety and security of the communications links that enable UAS operations, including UAS command/control links, tracking and identification, payload communications, and collision avoidance; it also is essential for managing UAS through a UAS traffic management system (UTM). Dr. Lance Eliot is founder of Techbrium Inc. and a Forbes online contributor. A globally recognized expert on AI Autonomous Vehicles, his columns have amassed over 1 million views and his podcasts have exceeded over 100,000 downloads. Formerly a professor at the University of Southern California (USC), he headed a pioneering AI research lab that received grants from the DoD, NSF, and various private firms. He has been a corporate officer in billion dollar sized companies, and is a successful entrepreneur that founded, ran, and sold several high-tech startups. Most recently he was a top executive at a major Venture Capital (VC) firm, and is well-known for his innovative book on how founders can best pitch to investors. He serves as a startup pitch judge, along with being a mentor at several incubators and accelerators, and is an angel investor. Peter ShannonFounder and Managing Director, Radius Capital
Peter Shannon has built his career as an entrepreneur and venture capitalist focusing on transportation technologies, with current focus on advanced aerial mobility and its application toward positive impact for transportation across the economy.
Peter is active in the aviation community around regulatory and technology issues critical to enabling high-scale adoption of aerial mobility systems. Peter is helping define a national vision and roadmap for Urban Air Mobility as a member of the Committee on Urban Air Mobility Research and Technology through the Aeronautics and Space Engineering Board of the National Academies of Science, Engineering, and Medicine. Through the National Academies, Peter is also an appointee to NASA’s Aeronautics Research and Technology Roundtable. Peter is involved in the FAA’s Unmanned Aerial System Integration Pilot Program as an advisor to the Choctaw Nation of Oklahoma and sits on committees developing standards for unmanned air traffic management, vehicle certification, and urban air mobility.